I've had some 30's repro fabric sitting on my shelf ever since I went to Oregon 4 summers ago. I bought it at Country Keepsakes in Brookings. It's not one of my favorite fabric collections - and as a matter of fact, I'd considered donating it to my guild's Sew What room. But over the past couple of weeks I began noticing posts on some other people's blogs about the Farmer's Wife Sow-Along happening on Barrister's Block. Randy is doing 6 blocks a month - 3 each on the first and third Wednesdays. She just started this month, so I figured it would be a good way to use that repro fabric.

I got the fabric out, and thought about the blocks I'd done when I did Farmer's Wife the first time, and realized I needed a couple of more colors.  I had to go down the mountain to get some flannel (it was on sale for $2 a yard at JoAnn) to use as a backing for a quilt I'm making for my daughter. I took the repro fabric with me, and found a great green at JoAnn to go with it. Then I went to Calico Horse, one of my local quilt shops, where Donna helped me find a nice cheddar/red to make my set complete. (Donna is the mother of one of my former students - who is now married and has a set of twins!)

So here are the fabrics I'll use in the Sow-Along (yes, it's deliberately spelled that way). 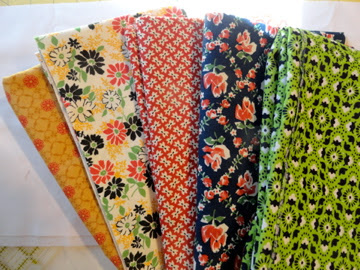 The three in the middle are from the original set (there was a turquoise, but I won't be using it). The floral on white is called Nothing But the Sinks, and it's from RJR Fabrics. The red and the navy are by Susie Osburn for Blank Quilting. The green is the one I picked up at JoAnn - one of their "Premium Quilting" fabrics. The cheddar on the left is called Circa 1934, and it's by Cosmo Cricket for Moda.

I'm caught up for this month - I did 6 blocks today, and none of them required templates. (I hate templates - but I'll use them if I have to.) Randy isn't doing them in the order they appear in the book.

I'm using white as my background fabric, and I think from now on I'll go back to photographing my blocks on the yellow mat instead of my white counter.


It's not too late to join this Sow-Along - just click on the button over on the right side of this page!
Posted by Cyndi at 5:43 PM 2 comments:

A weekend in the sewing room

We came back from our trip on Friday, and I couldn't wait to get back into my sewing room. I had several different blocks to work on, as well as a quilt top for possible inclusion in a book being written by a member of my guild.

The two blocks above are part of Randi's Solstice Stars series on Fresh Lemons.

This block, Stargazing, is from the new book Modern Blocks. I had checked it out from my guild's library, and have fallen in love with this book. I've already ordered my own copy from Amazon. I did the Stargazing block for Jeri in my Sew Bee Wonky Flickr group.


Sands of Time is the January block of the month in the Bloggers' BOM series. This one was designed by Quiltdad John.

In the Sylvia's Bridal Sampler Yahoo Group, which I just joined (yes, I'm a joiner!), we're given challenges to do each month. Then there's a drawing among those who do the challenge. This month we were to do any 4 blocks in Row F.  I did:  Top Left: New York Beauty (F5), Top Right: Album 2 (F6), Bottom Left: Ladies' Aid Album (F8), and Bottom Right: Aunt Sukey's Choice (F10).

My last accomplishment this weekend was to complete a top for a medallion quilt that MIGHT be part of a soon-to-be published book. I'll give a lot more information about this later, including the name of it, the person writing the book, and more. But for now I'll just show the picture: 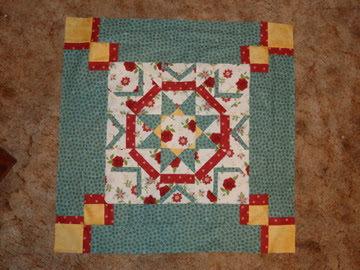 These are the latest blocks I've received in Boomerang 6.0.  There's still one more to come.

While we were recently camped in Bishop, California, I visited a fabulous store called Sierra Cottons and Wools. The owner is designer Barri Sue Gaudet of Bareroots. She designs and creates pieces for wool and felt.

Her store in Bishop has a nice selection of quilting cottons, and an abundant supply of wool, felt, yarn, and patterns for all kinds of projects.

Barri Sue says this selection of wool felt on bolts is one of the largest in the country.

This is one of her completed quilts using several techniques including wool appliqué.

In the center of the store is a large table with samples of all the candlemats Barri Sue designs. Of course, I bought a kit to try my hand at this new (to me) craft.

This is another of her quilts.

After I spent a good amount on cotton fabric and a candlemat kit,
I returned 2 days later for more!

I'll be showing my purchases off when we return home next week.

- Posted using BlogPress from my iPhone --trying it for the first time.

Quilt-Alongs and Blocks of the Month

There are so many quilt-alongs, blocks of the month, and other group quilting activities on the web - enough to keep one busy for centuries. I've chosen a few to work on.

On 42 Quilts, Jenifer has been doing both Modern Monday and Traditional Tuesday. I've played a little catch-up and have these to show:

Randi of Fresh Lemons is currently doing a Solstice Stars series.  I've recently acquired some bright new fabrics, and will be using them in these blocks.  In addition, I did a block from Lee of Freshly Pieced, called a Ribbon Star.


Lastly, for this post, I have a block called Triangles Galore, designed by Victoria of Bumblebeans, Inc. for the 15 Minutes of Play blog. I used "made" fabric with bright orange for mine, and now that she's made us a paper-piecing pattern, I'll try it with some of those new bright fabrics. 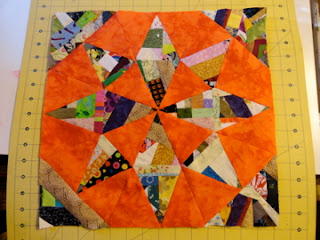