My machine eats my fabric!

I'm wondering if anyone else has this problem.  I have a new Babylock Grace sewing machine. I bought it in October.

When I'm sewing two pieces of fabric together, everything is fine. But when I'm sewing together two rows of pieces - say, HSTs, - the machine wants to eat my fabric.  It happens nearly every time I go over some intersections where there are several layers of fabric "bunched" together. About 8-10 stitches AFTER I sew over the seam/intersection, something grabs the fabric behind the needle, the needle starts to sew in place and then turns sideways.  I have to stop, take it all out, unstitch, and resew the area that has been grabbed and bunched up.

I took the machine back to the shop where I bought it, and tried to reproduce the problem with Teresa. It happened ONCE.  But at least she understood what I was talking about. Off it went to the repair guy, who returned it after a week and said something about adjusting the feed dogs.

But after only a week or so of using it the problem has returned.  I will be taking it back to the shop again.  I think tomorrow morning I'll grab a few scraps and reproduce the problem so I have some examples of what's happening. I didn't have that before.


I was just wondering if anyone else has experienced this.
Posted by Cyndi at 8:30 PM 1 comment: 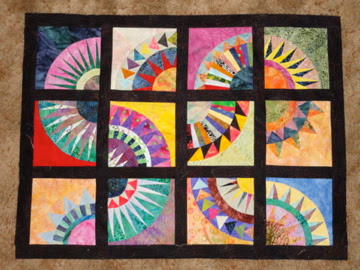 I subscribe to many blogs, and as I was zipping through my Google Reader last week, trying to get caught up, I passed a quilt made of New York Beauty blocks and black sashing. Aha!  I grabbed my batik scraps, pulled my New York Beauty paper-piecing patterns out of my notebook, and got rid of a bunch of my batik scraps. My patterns are from Ula Lenz and Donna Duquette (whose patterns are no longer available. So glad I saved them!)

These are 8" blocks, so this is a wall hanging-sized quilt.  I'll get it quilted sometime in the spring.
Posted by Cyndi at 8:24 PM 1 comment: 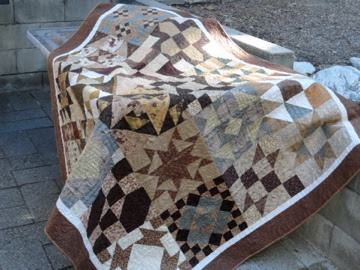 After several years of gathering and making brown sampler blocks, I decided to sew them all together and get Don's quilt finished. It's been quilted and bound, and now he's using it!
Posted by Cyndi at 8:15 PM No comments:

One of the joys of retirement and doing some subbing is being able to say no when I'd rather stay home and sew. So lately I've spent lots of days in my sewing room, working on various blocks for swaps, blocks for sew-alongs, and all kinds of miscellaneous projects.  As a result of doing this for many months, I've developed a huge backlog of tops that need to be completed.  I decided to make backs, and will be taking several tops and backs tomorrow to my guild for donation to community service. Someone else can donate batting and quilting! 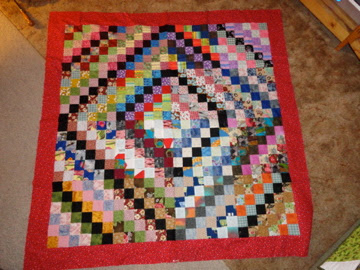 This one is a scrappy trip-around-the-world top I made with some of the blocks I won in Block Lotto. I have more, and will be making another top with them. 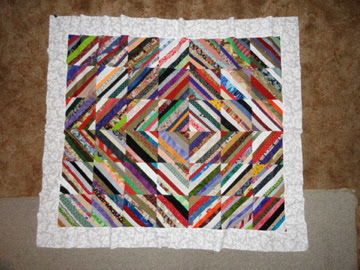 This is one of four string tops I've made with blocks I made while camping in my trailer. I've tried different patterns; this was the first. 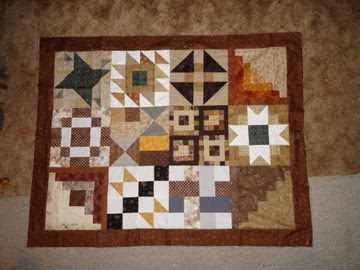 A couple of years ago I was in several different swaps where I kept asking for browns. I also made a bunch with some coordinating fabrics. My goal was to make what I came to call Don's Manly Quilt - he asked for browns. Originally it was going to be a queen, but he and I decided to make a smaller one for him to use as he sits in his recliner. The top above is made from some of the leftover blocks.