As this round of Boomerang winds down, I'm trying to get organized and make sure I have everyone's blocks documented - photographed and posted on the blog. This is proving to be a bit frustrating - I have always prided myself on my organizational skills, but I have made quite a few mistakes this time (forgetting to take photographs, forgetting to write down blocks received, etc.)  In addition, I'd sent out 3 different fabrics - the black dots to nearly everyone, the blue from Boomerang 5.0 to two people, and some dark brown to 3 others. I then promptly forgot that I had done so, and so I thought I was missing some blocks. In actuality, they'd been stored with their appropriate stack of blocks.

So now I need to upload the next-to-last group.  The last group, hopefully, will be those last gals who put it off until the last minute - and according to my records, there are 5 of them.

I still have two that came this round that were made with the turquoise fabric from last round - but I'll have to go through all the charts and the blocks and find them.
Posted by Cyndi at 11:17 AM 2 comments: 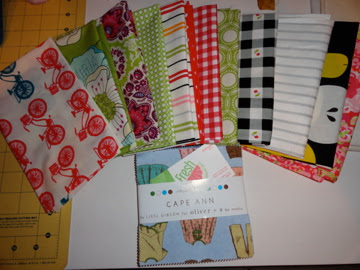 Above is some bright and beautiful fabric I just got from Randi at Fresh Squeezed Fabrics.  Randi's prices are great, and she shipped quickly. I think I have to get MORE! 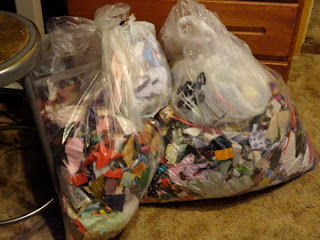 After I showed some crumb quilts and my 100-patch quilt to my guild a couple of months ago, I've become known as "the scrap queen" in my guild. Ladies who used to either throw their scraps away or use them to stuff doggie beds are now bringing them to the meetings for me. Yesterday Lois brought me these two GIANT bags crammed full of scraps. I've been slowly sorting them - tossing about half since they're either two small or too skinny. There are some big pieces in there, too - including bright florals, homespuns, stripes, solids, and calicoes. Looks like some more scrappy quilts are in the works!
Posted by Cyndi at 6:33 PM 2 comments:


I like scrappy quilts, as they help me use up the scraps that seem to multiply constantly. I did the Orca Bay mystery, but since I had so many greens and browns, I used those colors instead of red and black that Bonnie used.    Christmas Lights was a mystery in three consecutive issues of Quiltmaker magazine.

Our guild has a thriving community service component, and I was able to donate both of these tops. Susan will get them quilted and bound, and they'll find happy homes.

Bonnie is showing numerous versions of Orca Bay on her website.
Posted by Cyndi at 6:10 PM 6 comments:

I am doing a "pay it forward" activity on Facebook again - I did it last year and it was quite successful. The concept is that you post on Facebook that the first 5 people to comment will receive something handmade from me - and they have to do the same thing for 5 more people.  I decided this year to give my 5 friends mug rugs or mug mats. I learned that a mug mat is just smaller - so it can be used as a coaster.

I learned the idea for the ric rac from this tutorial on Jodie's blog Pleasant Home.

Wow - I can't believe it's been over a month since I last posted.  I've been busy, though.  From December  5 until the 22nd, Don and I were on a trip in our trailer.  We went to Arizona and New Mexico, doing some sight-seeing and visiting our son and his fiancé in Alamogordo, New Mexico.  (Kenny's stationed at Holloman Air Force Base right outside Alamogordo). I took my cross stitch basket with me and occasionally worked on a calendar-type SAL I obtained from Maryse Dupont.

Once we returned, I settled into a nice routine:  Monday, Wednesday, and Friday, I spend my morning swimming laps and taking a water aerobics class at Loma Linda University. Then I either come home or run errands, and then spend the afternoon sewing.   Tuesday, Thursday, and weekends, I either sew most of the day, or Don and I go for a walk or do something together.

Right before New Year's Day, Don and I decided to take our extra bedroom and convert it to a sewing studio.  Up until now, about 85% of my sewing stuff, including the desk and almost all of the fabric, has been taking up a huge corner of our living room.  It's been okay as far as companionship goes - I could sew while he watched TV - but it was cramped and messy.  So first we rearranged some furniture, got rid of a bed, and moved all the sewing stuff into that room.  I then contacted my friend Patrick, to whom I'd lent my drafting table while I was out of the classroom, and asked if I could have it back. He's taken my place as the president of the teachers' union, so he doesn't need it now. Don and I went to the high school and picked it up Tuesday morning.

I now have a large sewing space, with room for all my fabric, a desk for the sewing area, and a huge drafting table large enough for the cutting board,  a large ironing board, my printer, and extra work area. I've gotten a lot done, too!

I've also received numerous blocks for Boomerang (they'll have their own post), as well as one for the monthly bee on the Quilters' Message Board.


I'm also doing the cheddar bow ties along with Bonnie Hunter - I cut about 1/2 a yard of some fabric that I had into 2" squares- it has little flowers on it, but it's primarily cheddar - and will use all of it for the bow ties with various scraps.  I'm doing these as leaders and enders, but already have 9 completed.


Below are the placemats I made for Kenny and Robin. 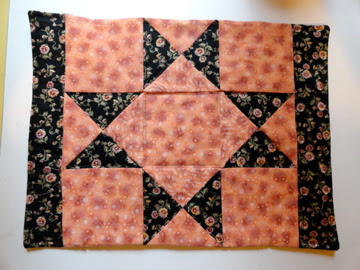