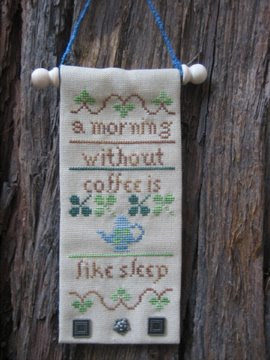 Not only am I addicted to coffee, I'm a Starbuck's snob. I just can't start my day without a grande Pike Place, sugar-free caramel, room for cream. Lattes are nice, but a bit "foofy." I end up with a stronger drink when I get the Pike Place, though it does look a bit like a latte. This pattern was a quick stitch - I finished it in one day - and made a cute little banner. I put it together with an iron and hem tape, no sewing, and used up some embellishments from my scrapbooking days.
Posted by Cyndi at 6:55 PM 6 comments:

For My Friend, Kathy - Courage - Donna Bayliss of By the Bay Needleart 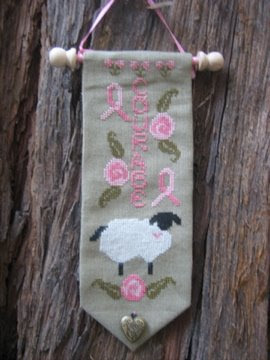 When I saw this on Nancy's blog, I knew I had to stitch it for my friend and colleague, Kathy. She recently was diagnosed, had surgery to remove a lump, and is in the initial healing-from-surgery, beginning-radiation stage. There are a few complications she's dealing with, at the same time that her daughter (who played soccer with MY daughter) just had a biopsy on a lump in HER breast.

I made this into a bellpull - a NO-SEW bellpull, which happens to be a very easy way to finish my longer stitched pieces (see above post). I just use the hem tape - the kind that turns into glue when you iron it.
Posted by Cyndi at 6:44 PM 3 comments: 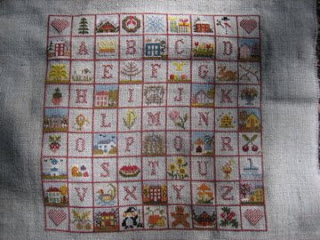 I stitched the 2008 Damier (checkerboard) SAL from Maryse, and will soon take it to get framed - I think it will make a good Christmas gift for one of my sisters. This was a fun and quick stitch - yes, there are 91 squares, but each one was small and a lot of them didn't have a lot of stitching (the letters, for example.)

Maryse has a wealth of free charts - she's a prolific designer - and her latest one is a great Halloween pattern that I think I'll try.
Posted by Cyndi at 3:12 PM 6 comments:

"Turtle Dove" (with a twist!) - The Courtney Collection 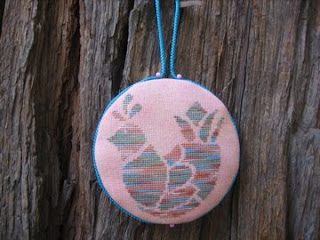 This little ornament was in the 2008 Just Cross Stitch Ornaments issue - but the original was on pink fabric and stitched in maroon/burgundy. I decided to try it with southwestern colors. What do you think?
Posted by Cyndi at 4:05 PM 4 comments: 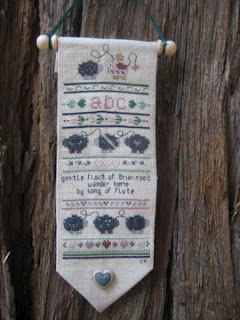 This chart was in Cross Stitch and Country Crafts way back in 1988. Back then, Shepherd's Bush was just the shop in Ogden, Utah, and Tina Richards was a designer under her own name. She had been with the Vanessa-Ann Collection up until this time. You can see one of her first "earth people" there at the top along with some of her sheep that crop up in many of her later designs. Tina is quoted in the article that goes with this piece as describing her " ' earth people' as 'these little persons who wanter along the spaces of my samplers and are the gentle reapers of the earth. Once, they, too, may have been gypsies [she always thought she must have been born to gypsies and stolen away from them at an early age], but now they have found homes where they must become a part of the world and its beautiful, yet mundane, qualities.' "

Every time I buy a new Shepherd's Bush chart, I look for her little "earth people." Have you seen them?
Posted by Cyndi at 3:56 PM 2 comments:

Another Thanksgiving Turkey from Prairie Schooler 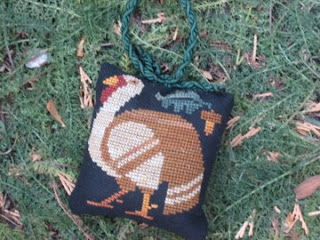 I stitched this for a Thanksgiving ornament exchange on 1-2-3 Stitch. It's from the Prairie Schooler booklet # 52: Prairie Year-Rounds. It was the first time to stitch on black linen, and with the magnifier, it was easier than I thought it would be.
Posted by Cyndi at 3:52 PM No comments:

Autumn round squares from Staci 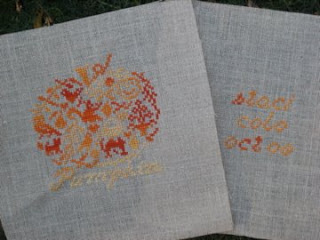 These are from Staci in Colorado, who sent them for the Autumn round on Fair and Square. Don't you just love the overdyed floss? I'm thinking this would make a great topper for a box.
Posted by Cyndi at 3:50 PM 1 comment: 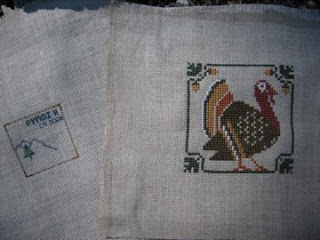 This PS turkey is from Prairie Schooler Booklet # 13: A Prairie Year. I stitched it for Karen for the Thanksgiving round on Fair and Square.
Posted by Cyndi at 3:38 PM 1 comment: