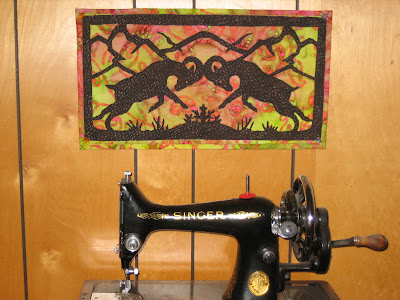 I received this mini a couple of weeks ago - it's from Karen, my March-April partner in my Flickr STUD (Swap 'Til You Drop) group. Our theme this time was "My Favorite Things."  We made a list of 5 favorite things, and our partner was to pick one or more and make a quilt for that theme. Karen knew that I liked the "out of doors," and she also visited my Wanderlust blog. I've posted about bighorns several times - how they're such beautiful animals that represent the wildness and wilderness I love.  She made this wonderful mini of two clashing bighorns. It's hanging where I can see it as I sit in my recliner.  Isn't it lovely?
Posted by Cyndi at 3:35 PM 2 comments:

A couple of recent finishes

During spring break, I took a few things with me so I could make some small quilts. 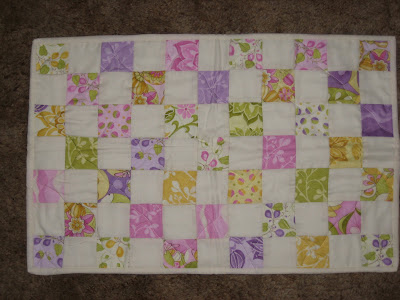 This one is made from a little pack of 2.5" squares I received as a gift. I gave it to a young woman named Jessica, who used to play soccer with Theresa. She was another recipient  of the "pay it forward" I did on Facebook. 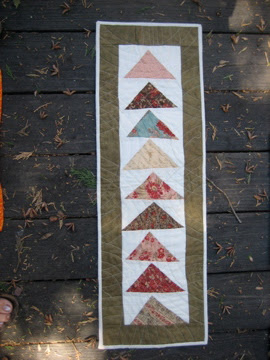 This wonky flying geese mini was inspired by Gwen Marston's Liberated Quilting books. I had two sets of 5" charms, both the same line, and needed to use them up. I made two of these, and will give them as gifts. 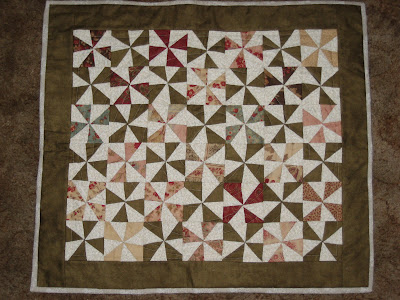 These crooked pinwheels are also from the same set of 5" charms, and also inspired by Gwen Marston. 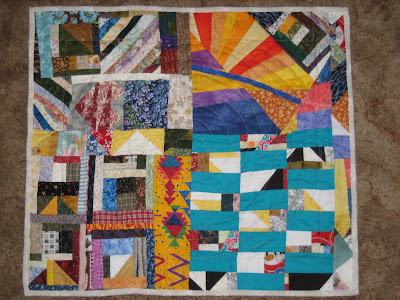 This is the back of the quilt. I just "made" fabric from scraps and put some of the bigger pieces together to make the back. 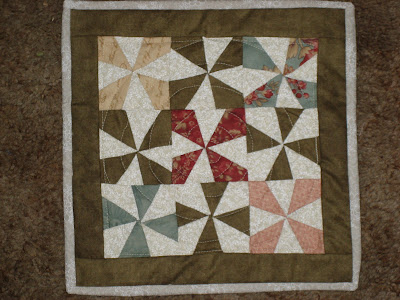 More crooked pinwheels. This little piece, which is about 10" square, was a condo-warming gift for my friend Chris. It goes perfectly with the colors in his living room. 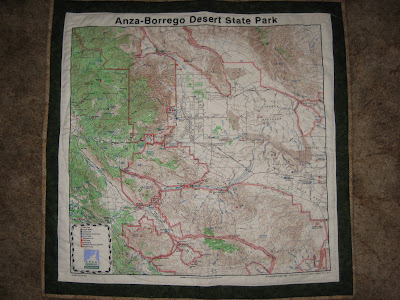 When we were camped at Anza-Borrego last month, Patty and I each bought a souvenir handkerchief map.  I added a border, put batting and a backing on each one and did spiral quilting and binding. Patty says hers will hang in their motor home, and I think I'll put mine in our trailer. 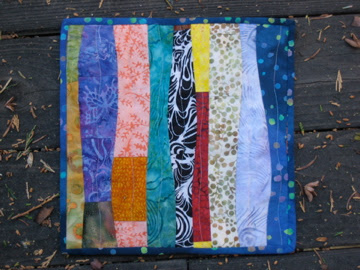 One of the blogs I contribute to, Bumblebeans 15 Minutes of Play, has organized a 12" x 12" mini swap, where we were to make it only from scraps in our stash.  I had pretty much used up all my small pieces of regular (non-batik) fabric on numerous other minis, so I decided to dip into my batik scraps.
The mini above was the first one.  I made so many mistakes on it, I decided to start over and make another one.  While I was doing "liberated quilting," there are still basic rules of quilting that one must follow. This one looked pretty shoddy on the back due to some basic errors.  At least it looks nice on the front, so I'll keep it. 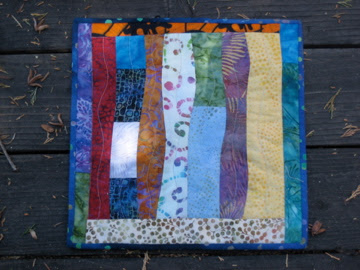 This was the second one. See the border? That fixed one of the errors I'd made.  This one will go to my partner for the swap. 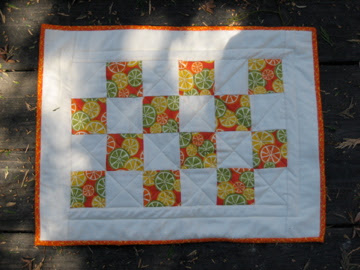 This one was another "using up" mini - I had these 3" squares and thought the color would go well on a summery placemat.
Posted by Cyndi at 2:53 PM 2 comments: