Hearts for the Crumb Along

An additional part of this past week's Crumb Along was to make two heart blocks. These were pretty simple. I made two flying geese for each one, then added a large square and two triangles. Then I added more strips to make each block large enough to trim down to 6". 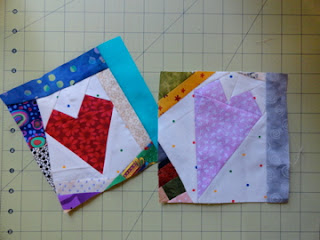 After spending all day Thursday on flying geese that ended up being used for something else, I finally got the hang of them for the Crumb Along.

I set up a "star factory."  I went through my boxes and trays of fabric, and made a bunch of what I'll call base sets. 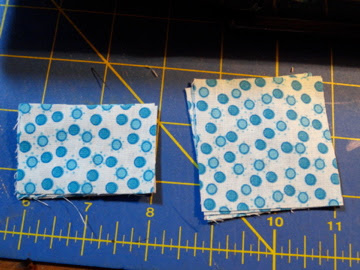 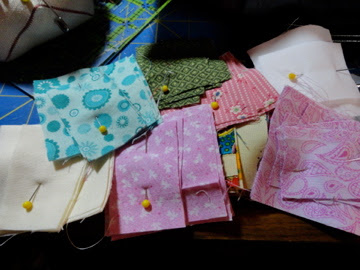 This is just a few of the base sets, ready to start adding star points.

Next, I cut lots and lots of multi-colored triangles from 2 1/2" squares for the star points.  This allowed me to not only use up a lot of my scraps, but I was able to make a dent in a basket of squares I've acquired from a two-year-long square swap. 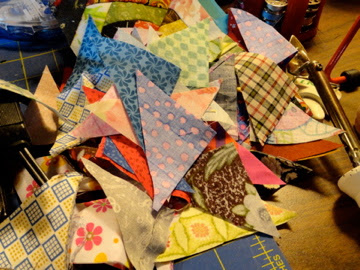 This is just a part of the pile of triangles.  As I'm assembling the stars, I make sure that no fabric is repeated on a star - it has 8 different fabrics used for the star points.

My next step was to create a small pile of the center squares - again, all different fabrics.  I used a lot of the swap squares here.  These center squares are 2 1/4" as well. 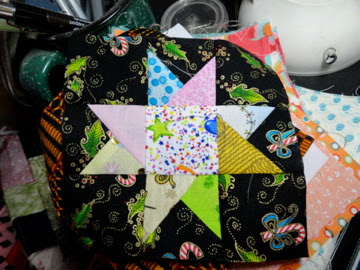 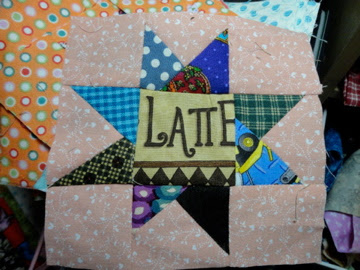 I then began assembling the stars, and was able to do a lot of chain piecing. These are semi-wonky, as I just used scissors for trimming once I started sewing.

When you screw up...just make something else!

So, I was merrily cutting and sewing, making dozens and dozens of little flying geese to be used in the Crumb Along.  I think I made about 80.  Then I moved to the next step, which was to use the flying geese in stars.   I quickly realized that I'd made mine completely different from Jo's, and they would not work in the stars.

I will happily make more little square flying geese so that I can make the stars for the Crumb Along. I therefore had several dozen little rectangular flying geese to use for something. Several months ago I had started a medallion quilt (starting with a center block and working out) with leftovers from other projects.  It has a center block surrounded by a border of rectangles, and also has two white strip borders.  I sewed a bunch of the little rectangular geese together and added them to what I'd created already: 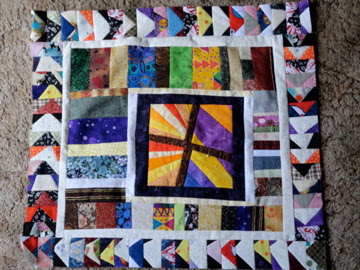 While I'm showing a quilt beginning using lots of scraps, I'll tell you about what happened at my first guild meeting last month.  A woman (I don't know who she was) came up front with a large white garbage CRAMMED FULL of scraps from two recent quilt projects.  She asked who it was in the group who made doggie beds, and she donated those scraps to be used as filler for the doggie beds.  I wanted to jump up and scream, "I'll take them!!!!" but I'm new, and all I could do was cringe. I later noticed during the show and tell that no one had a scrappy project of any kind.  Now I'm not going to assume that no one does scrappy quilting, but that day, no one was showing anything.  So I'm going to take my queen-sized scrappy log cabin quilt and this little medallion piece to show them that even the littlest crumbs can be used in great projects.  I want to make the point that even our scraps cost $8-$10 a yard - so they need to be used, not put inside doggie beds.
Posted by Cyndi at 4:25 PM 7 comments:

Victoria was given a friend's Air Force fatigues (he is now retired), and was commissioned to make him a quilt.  He knew that there would be lots of fabric left over, so he asked her to use the leftovers to make a quilt for Quilts of Valor. She asked her readers to volunteer to make blocks, and I was lucky enough to get my name in. 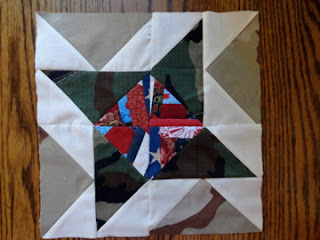 She gave us rules to follow:  use the fatigue material, incorporate some "made" fabric, and use colors that went with the theme. Of course, I used red, white, and blue in my "made" fabric.
Posted by Cyndi at 3:47 PM No comments:

I've received 6 more grownup blocks for Boomerang 5.0. There are still 4 that are owed to me - and I don't know if I'll get them or not. Those 4 ladies are on everyone's "missing" list. We'll just see if they're flakes or not. I hope not.

On my Liberated Quilting Yahoo Group I saw a post that linked to Jo's Country Junction and her announcement of a "Crumb Along."  Since I'm into scrappy, liberated quilting, I knew this one would be fun.

The first thing we are doing is creating two blocks using some flying geese.  I had a bunch of triangles left over from making African Violets for Block Lotto, and decided I'd use those. Since they were all dark, I made the triangle part of the flying geese white and cream.

I dug into my white/cream scrap tray and cut dozens of rectangles, 1 3/4" x 3".  Then I put together about 50 wonky flying geese. 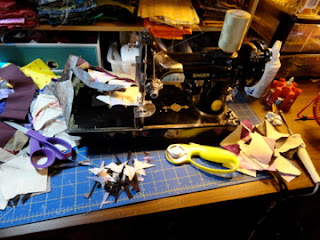 Jo says her sewing area looks like a bomb went off -- mine, too!

Since my initial white rectangles were 2" x 3", my flying geese are a bit odd. But I don't care. Continuing Jo's directions, I sewed strips to the sides of the flying geese units and then squared them up to make the 6" squares she said to make. 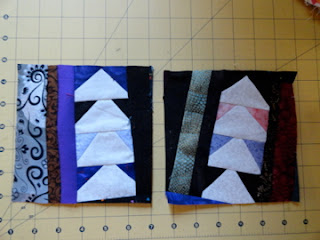 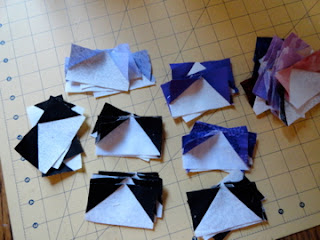 These are all the extra flying geese.  She said to make several more sets of 4. I ended up with 7 sets plus 15 other unmatched ones. I'll be able to use these in a border.
Posted by Cyndi at 3:32 PM 4 comments: