When my friend Janice asked me last week if I wanted her mother's quilting stuff - fabric and books - I immediately said yes.  I never met Emma, but she was a member of both of the guilds that I belong to.  As I was sorting through all of the fabric, I felt like I'd hit a Civil War goldmine. About 70% of the fabric was Civil War colors - muted burgundy, navy, brown, green, and neutrals.  There was also a bunch of flannels, a few yards of homespuns and ginghams, and the rest was scraps.  I spent the first couple of days cutting up the Civil War fabric into pieces for Home of the Brave quilts.  I'm about 2/3 of the way through that fabric, and so far have enough blocks for 2 complete quilts and 3 more quilts that need sashing. I'll be giving those to Cathy, the national Home of the Brave coordinator, at the next guild meeting so that someone else can piece the tops while I'm in Yellowstone.

The flannels and homespuns will go to our guild's Sew What room, where they'll be sold to someone in the guild who will put them to good use.

As I was going through the scraps, I found the makings of an uneven rails top. Apparently Emma was in the process of piecing the blocks - there were about 20 completed but untrimmed tops, and enough fabric for more. 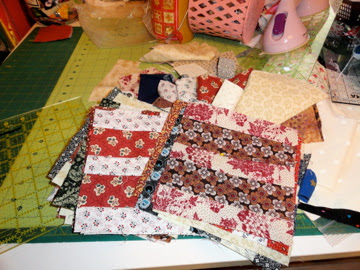 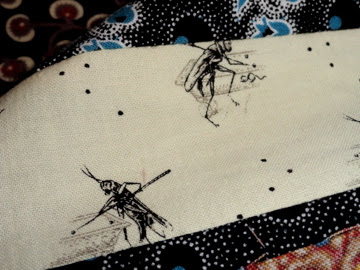 This was my favorite - crickets shooting pool.

First, I trimmed the blocks she'd made, and discovered that about half of them were trimmable to 6 1/2", but the rest could only go to 6 1/4".  So I trimmed them all to 6 1/4".  Next, I calculated that there was enough fabric for another 22 blocks, so I made them yesterday.  There are three 1 1/2" strips and 2 2" strips in each block. This left me with 42 blocks, so I sewed them into a 7x6 setting. Emma had also left a big piece of some navy fabric that went well with the blocks - I'm going to assume she intended it for the border as there was almost exactly the correct amount to make 5" borders.

So here's the completed top: 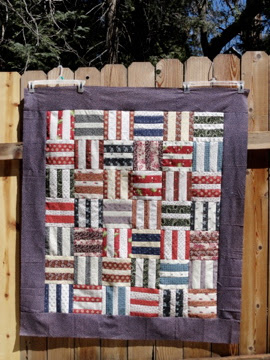 Janice, since I made you read this, this question is for you:  Do you want this?  You can get it sandwiched and quilted at Cherry Berry Quilts in Calimesa, and you'd have to spend a bit for some backing fabric (less than 2 yards) and some batting.  I can put on some binding for you.  You know how to get in touch with me. I think it would be a nice remembrance of your mother.
Posted by Cyndi at 2:46 PM

I love that you did this and it looks just beautiful. Such a talent you are.

That cricket fabric is fun!

Oh, Cyndi, it's beautiful! I didn't know my mom had a quilt in progress.
Thank you so much for the offer. I would love to have her last quilt. Please let me know what to do to have it finished. It will be a forever treasure. Thank you, my friend, for creating something so special.

Oh Cyndi, it's beautiful! I had no idea my mom had a quilt in progress. Thank you for the offer. I would love to have my mom's last quilt. It will be a forever treasure! Thank you, my friend, for your kindness.